Back to blog
Posted June 16 2022
Written by Createch

Pride Month: Testimonials From our Employees

In June, all over the world, the LGBT+ community celebrates Pride Month. To celebrate Pride Month, Createch wants to do more than just put a rainbow banner on our site. We want to showcase our LGBT+ members.

Discover also the article of our President. 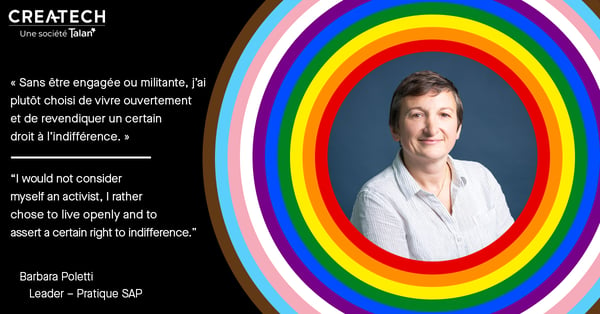 I don't particularly celebrate Pride Month. I am aware of the many years of struggle that were necessary to reach the level of tolerance and acceptance we are able to see today in our Western societies. I am grateful to those who have paved the way. I would not consider myself an activist, I rather chose to live openly and to assert a certain right to indifference. Putting a familiar face on an unknown reality is often a first step towards the acceptance of differences.

There are surely still people who are embarrassed to reveal their sexual orientation in the workplace or think that it can be a hindrance to their career. That's why it is important for those who feel comfortable talking about it openly to lead by example and help nurture a welcoming and caring environment. Above all, it must be demonstrated that it is the talent and commitment of each that counts, and that diversity is an asset that can be appreciated on a daily basis by working together.

I have never felt out of place or judged by my colleagues at Createch, nor by my clients. Overall, I find that we have succeeded in building a very inclusive environment, where diversity has become the norm. I'm not only talking about the LGBTQ+ community, but also about the presence of visible minorities, multiculturalism and gender parity, which are very much alive in our company.

Through my leadership, I have always made a point to foster an environment of diversity and equal opportunity. Our employees have been and will always be welcomed based on their competences rather than sex, ethnicity, religion or sexual orientation. Guided by these values, openness to differences and diversity are at the core of the company’s DNA. As a result, we benefit from a rich influx of different cultures all working as one for the success of our customers. 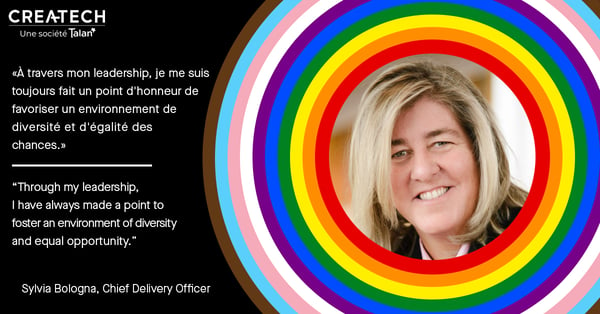 As a parent of two teenagers with my partner, I strive to embody the best role model I can be and help others feel more confident about themselves. I hope to be an inspiration to everyone to achieve success by embracing their differences and turning them into their strengths.

When I was asked if I was ready to step up and be part of the Createch messages for Pride Month, I addressed it with my spouse of the past 25 years. We first considered that we had nothing to advocate for as we have been in a civil union for 20 years (the 84th in Quebec), that everything was going well for us, even if these rights had not been recognized during our stay in Ontario. Immediately after, the thought occurred to us that if we were able to unite officially, it was because there were others before us who had claimed this right. 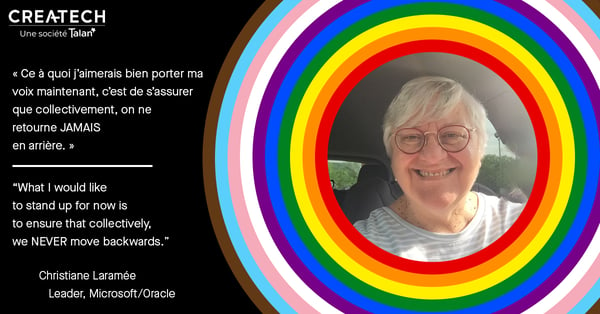 What I would like to stand up for now is to ensure that collectively, we NEVER move backwards. In this fragile and constantly changing society, let's keep an eye open for any shift that would go in this direction.

I must admit that I don't celebrate Pride Month per se. However, I do not fail to underline the fact that the Stonewall riots took place more than 50 years ago, and despite everything, there is still a long way to go in terms of tolerance, justice and acceptance. 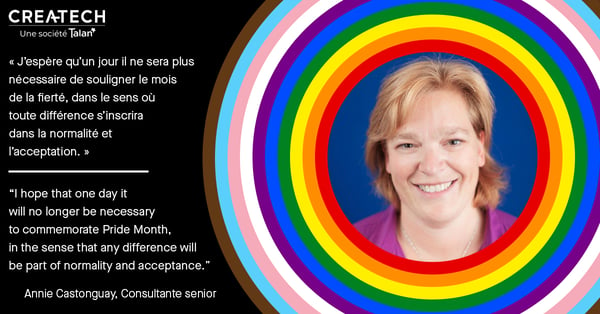 Ignorance is, in my opinion, the most critical source of problems, which is true for all spheres of differences: religion, culture, race, etc. Misunderstanding and lack of familiarity with a reality lead more easily to conflicts. People are sometimes afraid of what they don't know, so we have to keep discussing and explaining. I hope that one day it will no longer be necessary to commemorate Pride Month, in the sense that any difference will be part of normality and acceptance.

My expectations in terms of the integration of LGBTQ+ people in the workplace boil down to the acceptance of everyone. The more we talk about it, the less people will be surprised with words like I'm gay, trans or whatever. It will go into the normalization of things. Moreover, even if I don’t feel quite concerned by this point, I believe that we must think of our future colleagues and opt for non-gendered documents as some people are very affected by the question of gender identity.

Apart from a few dubious jokes from some colleagues at the very beginning, I didn't experience any problems at Projexia. I have always been clear and transparent about my orientation. Indeed, I believe that it helps with acceptance and understanding when there is no hiding place, but not everyone is ready to experience it that way. I know people who don't feel the need to be that open, and that's fine.